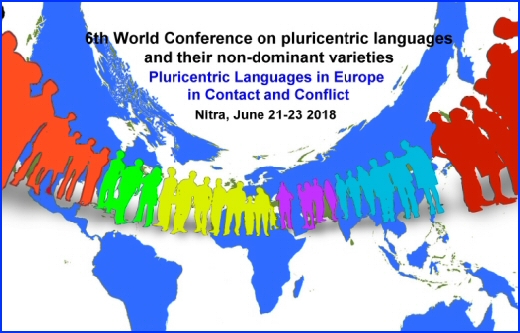 6TH WORLD-CONFERENCE ON PLURICENTRIC LANGUAGES AND THEIR NON-DOMINANT VARIETIES:

BACKGROUND OF THE CONFERENCE

The WGNDV focuses on the promotion of the theory of plc. languages by its worldwide perspective and on varieties that are small by the number of their speakers and their symbolic power, and are not the primary norm-setting centres of the language. They may often be falsely attributed the status of a “dialect”, and often have little or no codification of their norms. The previous conferences of the WGNDV (see www.pluricentriclanguages.org) have shown that non-dominant varieties around the world have many linguistic and sociolinguistic features in common.

OBJECTIVES OF THE 6th CONFERENCE:

•   The thematic focus will be ON CONTACT AND CONFLICT BETWEEN AND WITHIN PLC. LANGUAGES AND ND-VARIETIES THAT ARE SITUATED IN EUROPE as we think that there are open questions that need research and discussion.
•   And second major topic is TO GIVE INSIGHT THIS TIME INTO THE SITUATION AND FEATURES OF LITTLE RESEARCHED PLC. LANGUAGES AND VARIETIES.

The main objectives of this conference are:

1. TO GET EXHAUSTIVE REPORTS OF THE SITUATION IN PLC. LANGUAGES AND ND-VARIETIES IN EUROPE WHERE THERE ARE CONTROVERSIES OF ANY KIND. The controversies might be of different types (to name only a few):

•   Conflicts between dominant and non-dominant varieties about norm-setting issues; Conflicts within non-dominant varieties about which norm should be preferred – exogenous language standards that are leaning towards the dominant norm or native norms etc.
•   Intensive language contact in plc. languages with contiguous language areas and norm pressure on nd-varieties (e.g. influence of German German on Austrian German)
•   Disputes in and between languages that are linguistically close to each other whether
•   they to be considered as languages of their own or as varieties of a single pluricentric  language.

2. TO GET EXHAUSTIVE REPORTS OF THE SITUATION OF AS MANY PLC. LANGUAGES AND ND-VARIETIES IN EUROPE AS POSSIBLE AND in particular of lesser known and researched ones:

3. TO DISCUSS DIFFERENT THEORETICAL APPROACHES AND MODELS FOR THE DESCRIPTION OF PLC. LANGUAGES, ESPECIALLY IN REGARD TO LANGUAGES WITH CONTIGUOUS LANGUAGE AREAS (ALBANIAN, FRENCH, GERMAN, SPANISH, RUSSIAN ETC.).
Different models are propagated at the moment and need consideration in respect to their validity:

•   Models that are based on the notion of state languages and thus considering each nation as a linguistic centre of its own emphasizing the identity aspect that is connected to national varieties. (The sociolinguistically-oriented standard model.)

•   Models that mostly downgrade national varieties to geographical variation. This approach that is often found in centralised plc. languages and in dominant varieties of languages with contiguous language areas (see above). (The pluriareal model.)

•   Contested pluricentricity in new plc. languages where the dominant variety rejects the idea of pluricentricity and insists on a unified standard language or where there are varieties that still lack a broadly accepted standard due to the competition of several centres (Catalan). (The contested-pluricentricity-model)

The organizers of the conference would be happy to get many proposals for papers that discuss aspects of the above named models and want to encourage authors to put forward their own concepts.

4. TO DEEPEN THE THEORY OF PLC. LANGUAGES AND THE METHODS FOR THE DESCRIPTION OF ND-VARIETIES IN PARTICULAR IN RESPECT TO:

•   Second level forms of pluricentricity within national varieties and their theoretical treatment;
•   Strategies for coping with language shift caused by electronic media and satellite TV spreading dominant norms to non-dominant varieties;
•   Treatment of linguistic and pragmatic features of nd-varieties in education in primary and secondary schools;
•   The usage of endonormative codification strategies and their impact on the development of varieties and languages;
•   Measures of status planning and corpus planning etc. etc.

5. THE TREATMENT OF LINGUISTIC VARIATION IN PLC. LANGUAGES IN LANGUAGE TECHNOLOGY (SPEECH RECOGNITION AND SPEECH SYNTHESIS)

We are looking forward to bringing together young and established researchers working on pluricentric constellations and linguistic cultures all around the world. Submissions of papers by young researchers are particularly encouraged. A major effort will be put into supporting the participation of researchers from financially disadvantaged countries.

TIME FRAME / CONTENTS OF PAPERS
Papers (25 min. + 5 min. discussion) should address one or more of the above-mentioned objectives of the conference as mentioned above.
Workshops: Workshops (90 minutes long) should concern specific languages and their various non-dominant varieties, and particular methodological problems in the description of non-dominant varieties.

DEADLINE FOR SUBMISSIONS OF ABSTRACTS FOR PAPERS/WORKSHOPS: MARCH 30, 2018
NOTIFICATION OF ACCEPTANCE: April 15, 2018

ABSTRACTS:
LANGUAGE: All abstracts must be written in English;

The conference languages will be English plus the languages of the sections for specific languages if there are enough presentations to establish a section. Please indicate in your abstract if you want to use another language than English for your presentation.

LANGUAGE OF WRITTEN (POWER POINT) AND ORAL PRESENTATIONS:
All (power point) presentations at the conference must be written in English, the oral presentation can be held in the language of the section.

PUBLICATION OF PAPERS AND DELIVERY OF PAPERS:
A volume of selected papers is to be published by Peter Lang Verlag, Frankfurt. All papers for the conference and the publication will be peer-reviewed.